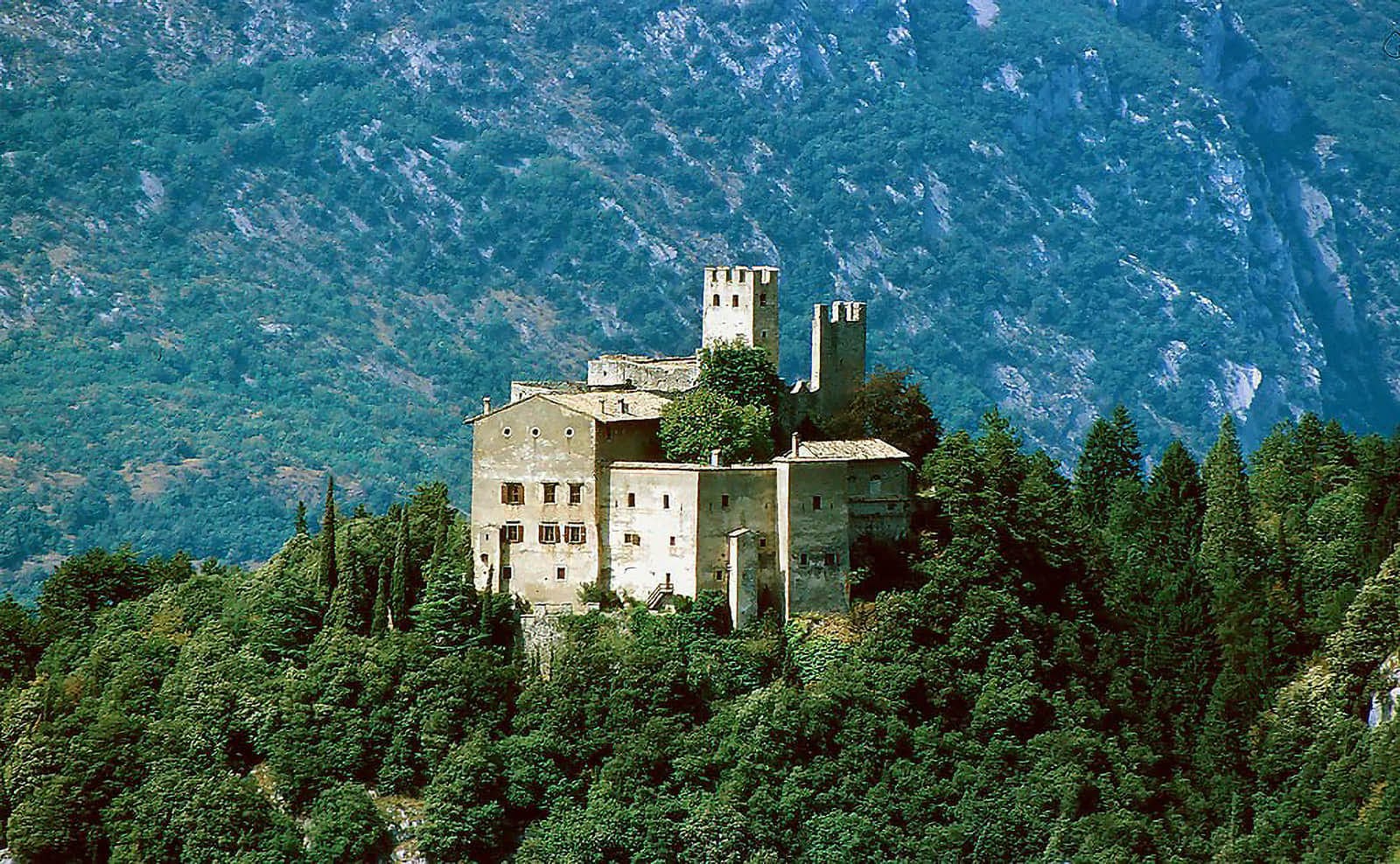 Castel Madruzzo, Lasino (Trento). On a rocky hill, overcome the forest that covers the mountain, they appear full of nobility and properties in the memory of the time, the walls of an ancient castle: Castel Madruzzo. A strange appearance, as if the mountain growing upwards, at a certain point it turned into the fortress and the forest of oaks and holm oaks all around would vibrate slightly.
Going up a steep road carved into the rock (built in the first half of the 16th century by Giangaudenzio Madruzzo, father of Cardinal Crostoforo Madruzzo) who flanks the medieval walls, you reach the manor.

Castel Madruzzo can be divided into three parts: the medieval part with the ruins of the two towers, the Renaissance part containing the residence combined with the first by high walls with two ramparts and a vast park entirely fenced by walls.
Beyond the medieval part with the towers of Gunpone and Boninsegna which are in a state of precariousness, the castle is in good condition and the sixteenth -century part is perfectly habitable and fully furnished and equipped for hospitality use.

Entering you immediately notice the care in the ordinary maintenance of the outdoor spaces, including the court where the ancient well/cistern stands. The small church (dedicated to S. Nicolò) is also interesting, in which at the time of the Madruzzo Il Pievano of Calavino had to celebrate the Mass at Christmas and Easter. The church presents itself in good condition in the frescoes and paintings and boasts the coats of arms of the family and the Prince Bishop Cristoforo Madruzzo.

The castle is surrounded by a wonderful park of 12 hectares, enclosed by a wall wall and characterized by interesting arboreal varieties, from holm oak, oaks, to secular beech trees.

The habitable area is equipped with an electrical system, telephone (with derivation in all rooms on the first floor, 5 points on the ground floor and basement), water system (n.13 bathrooms bathroom + laundry + kitchen) and sewage.
The supply of drinking water is guaranteed by a aqueduct for exclusive use.
The connection to the methane gas system is not present, but the supply has arrived in the last year at the village below.
There is a lighting system of the Cassa di Castello.
Fantastic investment opportunity.

HISTORY
The first documents concerning the castle date back to 1161 when the prince bishop of Trento Adalpro II granted him in a fiefdom to Gumpone and his nephew Boninsegna. The latter were the progenitor of the first Madruzzo family. During the clashes between Guelphs and Ghibellines, the Madruzzo were always faithful to the bishops of Trento and for this they were attacked by the field and by the Seiano, who came to deal with the castle. At the end of the struggles, the manor returned to the possessions of the Madruzzo.

In 1380 the male line of Madruzzo died out and, after some struggles for the inheritance, the castle in 1389 passed to the Roccabruna. The latter, overwhelmed by the debts, after a few years they were no longer able to cope with the costs for the administration of the castle and in 1441 they ceded him to Sigismondo Stetten of Carinthia, captain in the castle of Segonzano. However, however, he was not able to support the economic commitment that the castle requested and in 1447 he gave him up to Aliprando son of Guglielmo di Denno-Nomi. Aliprando died without children, he passed to his nephew Giangaudenzio, who began to be called Madruzzo and took on a coat of arms that was referred to that of the previous family. He brought considerable improvements to the castle making it more comfortable and adapting the defenses to new firearms. One of his sons was Christopher Madruzzo, who began the Council of Trent and who was the first of the Bishops belonging to this family who ruled Trentino for more than a century. During this period the castle was repeatedly expanded and embellished and was used as a residence of the bishop's principles and place for important parties and guests.

In 1658 with the death Carlo Emanuele Madruzzo also died out the male line of the second family of the Madruzzo. For marriage, the castle then passed in 1661 to the Lenoncourts, which in turn were extinct leaving their properties to the carts of Genoa in 1691.

In 1703 during the march of General Vendôme in Trentino in the context of the Spanish succession war, the castle was given on the flames and almost completely destroyed. Reconstructed in the nineteenth century it quickly fell into ruin, also due to the disinterest of the Carretto family who sold it in 1873.